Mt Sinai medical school has a program that admits non-science majors who have not taken the traditional premed curriculum, but instead have majored in the humanities and social sciences. These students do just as well, are more likely to spend time doing research, and are twice as likely to become psychiatrists than regular track students.

It's interesting that they limit the exceptions to humanities and social science majors. What about quantitative majors? Is there a med school who will take math, physics, and computer science majors who have not taken all the premed courses? Many science-smart students like learning hard material and are turned off from the grade-conscious nature of premed courses. If you are required to be grade conscious, you don't take risks by taking hard classes: the course that I learned the most from during my freshman year was a full-year math class where I got one of the bottom 2 grades in the 55 person class during the first semester and my advisor urged me to drop the class, but the second semester I was in the top third of the course. It was a trial by fire that helped me in theoretical graduate school statistics courses, and I wouldn't have taken it if I had been afraid of that first semester B-. And if I'd moved up from the 2nd percentile to "only" the 40th percentile, that would have also been a victory. The happy ending is that I learned how to write proofs, or in a pinch fake them reasonably well.

By contrast, I took a premed biology course during my first semester of college, and I loved the material. It was totally fascinating, as were the dissections (though the calves heart smelled), and I think my A- was good enough that I could have been premed if I'd wanted to. The difficult part was keeping my lunch down when my classmates continually asked what was going to be on the test. After half a dozen memory-based quizzes, I was so pleased when a quiz actually asked us to figure something out for ourselves. Finally: thinking! Some of my classmates protested this question because "it wasn't in the textbook!" Someone who spoke that way in a math or physics course would be ridiculed, and an instructor wouldn't even see the need to defend the question. Of course students are required to use critical thinking. In this premed class, memorizing the textbook seemed to be an accepted part of the culture.

From the other side of the lectern, at least in a biostatistics course, premed students were a complete joy to teach. In graduate school, I was the only TF for a 53 student biostatistics class that was 90% premed, and they were some of the nicest and most interested students that I taught. Perhaps they were fun students to teach because only the most intellectually curious premed students self-selected into biostatistics, or because all of the material was highly related to actual medicine rather than abstract science, so they saw the immediate relevance, or because of the way we taught the class with lots of handouts and everything in the textbook and being very clear about expectations.

So I don't mean to stereotype premed students. But as a math and physics undergraduate, the prospect of taking orgo and p-chem was not appealing just because of the culture that I perceived there.

A bigger argument for a quantitative track to med school is that the quantitative fields of study absorb just as much time as the intensive humanities majors: it takes (at least) as much time and coursework to learn to do proofs, derivations, program computer operating systems, and analyze complex datasets, as it does to read, write, and speak foreign languages and write a 200 page senior thesis.
Posted by Janet at 12:32 PM No comments: 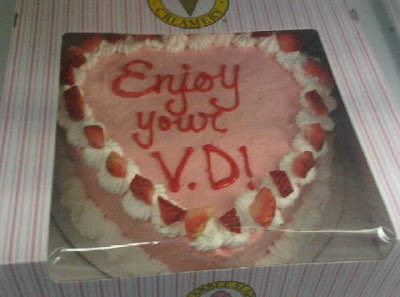 As my time on the CDC's STD postdoctoral fellowship draws to a close, Cake Wrecks featured an appropriate cake (above).
Posted by Janet at 11:07 AM No comments:

New study on the determination of different suicide attempters

People with guns in the house are more likely to commit homicide or suicide, according to hundreds of studies in the injury prevention literature. This difference exists even for households that have owned a gun for years, which means that in most cases, the gun was not bought for the purpose of a homicide or suicide that happened years after purchase. The common interpretation of the data is that many people have impulses that might lead them to homicide or suicide, but those who have a gun available can carry out their impulse quickly and easily, so are more likely to do so. By contrast, the suicidal/homicidal impulse does not last long enough for people to actually go and specially buy a gun for the purposes of carrying out their impulse.

Now a study finds that people who attempt suicide by gun are only moderately more likely to attempt again and successfully kill themselves. It may be the case that in many of the gun attempted suicides, the suicidal attempt was just the fulfillment of an impulse facilitated by gun access. If a gun were not available, certainly some people could be determined enough to actually go out and apply for a gun permit and then get a gun, but for many people the impulse would dissipate, and they would not have carried out the impulse.

Likely gender is also involved. Cutting and poisoning are more common among women, and women are less likely to be successful at suicide.

The hypothesis about impulse being the cause of gun attempted suicides implies that most of the methods with low or moderate chance of successful later suicide are easily accessible and implemented, and indeed many involve materials easily available and could conceivably be carried out impulsively. The methods with high likelihood of later suicide also involve easily accessible materials, but may involve psychic costs that make them difficult to implement.

In short, I think the Supreme Court may have just increased the suicide and homicide rates by allowing more people easier access to guns that can be available quickly and easily enough to fulfill an impulse that would otherwise dissipate.
Posted by Janet at 10:07 AM 2 comments:

Sarah Palin has a new ad featuring women who, the ad implies, are traditional, sensible moms who know best. The ad makes vague statements like "We don't like the direction this country's going," as the camera lingers over blonde, brunette, grey, and white-haired daughters, mothers, grandmothers, of all shades of white, and even one in a wheelchair with "Don't Tread On Me" on the wheelchair's back. That sure sends a message, but I darn well hope that was completely unintentional. Right?
Posted by Janet at 8:49 AM No comments:

So many things wrong in this news story: in Pennsylvania, a state requiring parental consent for abortions, a 13 year old girl pregnant by her 30 year old "boyfriend" attempts to perform an abortion with a pencil, goes into labor, boyfriend buries the stillbirth or baby in a plastic shopping bag in the woods, and girl goes into hospital.

Things wrong:
1. Sexual coercion of minors often happens in families where parents just aren't paying attention. Parents are so out of the picture here that this 30 year old "boyfriend" has been with this girl for 1 year.
2. Even in the best of cases, adolescents have undeveloped judgement. Where teens will not involve their parents, doctors are the next best alternative. Not allowing doctors as an alternative, teens turn to their own judgement. Adolescents' brains aren't fully developed, so they may not see consequences of their actions.
3. Shady characters like pedophiles have poor judgement. This fellow may even be a murderer if baby was born alive, and yet the boyfriend is the only adult acting in this story. A legal abortion would involve doctors and nurses.
4. Finally and most importantly, illegal abortions are dangerous. On top of the trauma of pregnancy which is usually unsafe for a 13 year old, she had to be hospitalized.

Laws have to work at the borderlines. Most pregnant minors are 17 or so, many parents are supportive, and most teens tell their parents about their pregnancies, but 12 year olds do have sex and get pregnant, and often it's in crazy cases like this where the parents are just not paying attention. In my 8th grade class of 70 children in the best-funded school district in Illinois (at the time), we had 1 pregnant girl, and same in the year before us class of 60 children, a pregnancy rate of about 3% for those two years.

In Utah, a similar case of a woman asking to be attacked in order to induce abortion created a new anti-abortion law.

Could this case possibly cause Pennsylvania to alter its abortion laws so that parental consent was no longer required? I wish, but somehow it seems unlikely.
Posted by Janet at 3:02 PM No comments:

A recent XKCD notes that parents may need to teach their parents a lot more about sex now that there are internet popup ads. While it's a funny exaggeration of the situation and it seems to be a new situation, it does illustrate the age-old truth that kids always know more than adults think, making it clear that all the time discussing whether to teach contraception in schools is a waste. A study that I did found that most Southern Baptists surveyed in church Sunday School learn about birth control and STD prevention from their schools and from their peers. Take away the schools, and you are left with peers. And internet pop-up ads.
Posted by Janet at 10:26 AM No comments:

Quantitative work is not mysterious

Some are impressed by quantitative skills. Those of us who were math and physics majors (or in my case, both) are more realistic. Monday's xkcd gives a secret trick in the mouse-over box that pops up that all math and physics majors learn. For those who haven't figured it out, I'm glad that there's a comic strip to reveal the secret.

Also, a few weeks ago, there was a good xkcd about the attitude of some science types towards about interdisciplinary work.
Posted by Janet at 10:19 AM No comments: