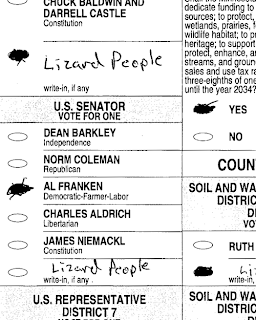 Context effects could have increased the prevalence of extreme opinions:  when the survey is entirely made up of kooky questions with extreme wording ("hoax" versus "exaggerated"), people may be more likely to give kooky or extreme answers.  If just one of these questions had been included on an otherwise straight-up opinion poll, a lower percentage may have endorsed it.  So maybe 4% belief in the the lizard people isn't so high, after all.
Posted by Janet at 5:02 AM